Robert McLeod and James Hogan at the Affiliated dinner 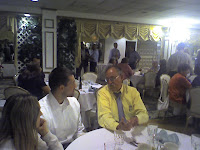 The Monmouth County Affiliated Republican Dinner last night was a markedly differently gathering than those in recent memory.

Approximately 120 people gathered at Doonlan's in Spring Lake on a hot summer weekend evening to welcome the chairmanship of Joe Oxley. This was a stark contrast to the 30 some odd people who gathered for a candidates night back in March, when most candidates didn't even show.

But more than the numbers, what was different was the quality of the camaraderie in the room. Upbeat, friendly, optimistic, welcoming, fun. Smiles and laughter were prevalent. Former adversaries were forging friendships. Sneers and whispers were missing. "It is great to see everybody" and "this is fun" were the surprised exclamations I heard most often.

Chairman Joe Oxley was welcoming and upbeat, even when reporting some of the unpleasant tasks he's had to handle with in the last 3 weeks, like renewing a workable relationship with the party headquarters landlord who hasn't been paid in five months.

Oxley, the former sheriff and a security expert declared that the party headquarters will be a welcome center open to all. Gone will be the excessive security and the buzzer to get in. If the jewelry store with millions in diamonds across the street doesn't have to buzz customers in, volunteers and visitors to Republican Headquarters don't need a screening process for entry.

Headquarters will be closed for two weeks in July while volunteers clean up, paint and re-furnish the place.

Oxley announced the following appointments to his team:

Gerri Popkin is the party Director of Operations. Gerri will organize the headquarters renovation and party operations going forward.

Hank Butehorn, a newly elected county committeeman from Middletown, Conservatives with Attitude blogger and activist with Americans for Prosperity-NJ is the party Director of Training and Development. Hanks will be organizing campaign seminars for county committee people, municipal chairs and other volunteers.

Howell chairman John Costigan is the Director of Grassroots Development, recruiting and empowering Republican volunteers throughout the county.

Ron Gravino will remain party Treasurer, and will have money to count.

Oxley acknowledged that the recent divisions in our party will no disappear overnight, but that his focus in a bringing everyone together focused on winning in November.

He's off to a very good start.
Posted by Art Gallagher at 7:21 AM

Sanity has once more been restored to Monmouth County Republicans.

Oxley will be an outstanding success to the MCRO and will eventually lead the state GOP.

Popkin will excel in her new post as will Hank and John.

Three excellent choices to mark the start of a successful and effective GOP leadership under the talented hand of Oxley.

THE SHERIFF IS IN THE HOUSE!

The Sheriff is in the house???

Kind of sounds like the fox is in the chicken coop. Under the leadership of former Sheriff's Oxley, Guadagno, and now current acing sheriff Shaun Golden, the Monmouth County Jail has become a dark black financial hole making at least the office of sheriff vulnerable in the upcoming elections.

I know this, because I have OPRA'ed documents, and the information does not bode well my friends for at least this office.