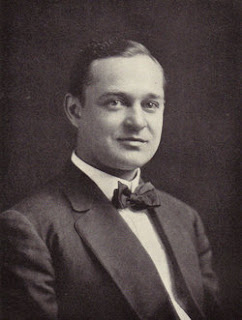 I was elected to office as a Republican in the first-term, mid-term elections of a progressive Democrat President who had large majorities in each house of Congress. The President used his progressive ideas and large Democrat majorities to pass sweeping changes to the Federal Government: The Federal Reserve Act; Federal Trade Commission; and the Nation’s first Progressive Income Tax. At the same time, this “Progressive” President effectively used race to separate and weaken his opponents.

I also served in Congress through the particularly destructive early years of the Roosevelt Administrations, where the power of the Federal Government continued to expand and where economic difficulties were used as an excuse to involve the Federal Government in everything from the financial markets to railroads, industry and farming. He also concentrated on Unions, giving them the Wagner Act, which created the National Labor Relations Board, hamstringing private industry’s response to the unionization of its workforce.

If any of this sounds familiar, it should. The United States is undergoing change as dramatic and damaging as the “change” promised by Wilson’s “New Freedom” or Roosevelt’s “New Deal” or Johnson’s “Great Society”. But Obama’s “Hope and Change” may be the straw that breaks the camel’s back. Wilson and Roosevelt and Johnson all had wars that saved our economy. Obama does not. (Although he could)

I am here at the request of my old friend William Seward to point out the many and myriad shortcomings of the buffoon who occupies my old chair in Congress, Rush Holt. I feel particularly suited to this task, as not only did I represent the 12th District in Washington DC, but while I was there I had the great pleasure of serving with Rush Holt Sr., the father of the buffoon, who was a Senator from West Virginia. Although our time together in the Nation’s Capital only overlapped by one year, I take great personal pride in the fact that the elder Holt, who was elected as a raving lunatic ally of FDR, soon came around, and within a year of taking office, became a vocal critic of the New Deal. Perhaps our many discussions over cocktails at Martin’s Tavern in Georgetown are what led him to be one of the most conservative of Democrats. Eventually, he even became a Republican.

But, enough about me. I will check in here every so often to tell you a little bit about Rush the Junior, his complicity in the downfall of America, and his utter incompetence in all matters relevant to the modern 12th District.

Please feel free to reach out to me with your questions or comments. Although I am sure that Mr. Gallagher will pass on any comments, I can also be reached at frednj12@gmail.com. I look forward to sharing the next 85 days with you.
Posted by Art Gallagher at 11:28 AM

Thanks for having me, Art!

Are we supposed to be excited? Awed? I mean really. Some anonymous whackadoo playing a role? What's the matter Art? Can't you get anyone besides me with the balls to come here and sign their own name. You know. Stand up and be counted for their beliefs as opposed to hiding in the bushes firing anonymous sniper shots.

However, seeing as this is how you started out - no surprise here that you're thrilled. Birds of a feather and all that.

You and your balls are always welcome here.

It's not how you start, it's how you finish.

You were finished the moment you got started anonymously.

Come on now, Kathy, you can do better than that.

First saw Rush on the Grace Under Pressure tour in 1984, New Haven CT. I was floored and amazed the whole time. I have not missed a tour since. I used to get Rush Tickets easily through Ticketwood.com .I think my favorite one was when I skipped school to go see the Power Windows tour in Mass. Believe me, there is nothing like a Rush show — mind blowing.

Kathy, you have the typical mindless leftist approach. Attack the messenger, avoid and ignore the message. Do you watch Beck? You should. He has 1 episode where he shows 2 pages of new gov't agencies created by FDR in his New Deal (or Raw deal) tenure, 4 terms. In the HC bill alone, BHO created 14 pages of new gov't agencies or departments. If you think that puts us on the road to liberty and prosperity you are either dillusional or a radical leftist oogling at the thought of the apparachik crushing our Republic under the weight of over-regulation, cronyism and overt theft. Maybe you should go to the Huffington post or Saul Alinsky's blog to get warm and fuzzy. Here you will only find stamina, backbone and truthfullness. Oh I forgot, lefties don't like those traits.

During Rush Holt’s decade long occupation of our congressional seat, he fought vigorously to expand the size and role of the federal bureaucracy, which only added to the national debt, and increased the federal deficit, with not too many salutary benefits to point to. As Rush Holt sat in Congress our debt and deficit grew larger, never really making any serious suggestions about curtailing it, but making concerted efforts to increase it. Scott Sipprelle, on the other hand, was working hard in the private sector, supporting his family, creating real jobs, balancing budgets, and driving innovation, while also finding the time and resources, not federal bureaucrats and taxpayer dollars, to contribute greatly to various organizations and non-profit’s. Mr. Sipprelle is the best candidate, at the right time, with the requisite skill sets and financial dexterity, to face the liberal menace that now controls the Democrat Party, and with it, our seat in Congress. Too many political careerists, along with their cadre of salaried federal bureaucrats, are arrogantly pushing their narrow-minded special interests, with slim majorities mind you, over that of the general interest. During a time when extreme political ideologies, on both sides of the political spectrum, are polarizing the populace for political expediency, and distracting this nation from accomplishing real political reform and economic renewal, we need a person like Scott Sipprelle, who is not beholden to any other interest than that of the people in New Jersey’s 12th Congressional District.

Anonymous political discussion has been with us forever and always will be. The right to speak anonymously is part ofour right to free speech and as such should be defended.. Many people who have controversial politic ideas rightfully fear consequences that could effect their ability to earn a living. This is especially true where staements made on the internet can live forever. By allowing anonymous speech we add to the political discourse and get opinions that might otherwise be stifled.
Like any right it can be abused but that does not mean all anonymous speech is bad.

Holt Senior was all over the place.
For awhile he was a socialist.

I wo0uld love some more details then wikipedia has because it sounds like he was not a republican by choice.

Whats even more interesting that his father (our Holts Grandfather ) was an athiest and a socialist who supported Eugene Debs.
Thats quite a political history for one family

Correction- Holt Senior was never a socialist only Granddaddy

One is advised to remain anonymous in these parts if one doesn't want to have their Sipprelle lawn sign pulled out by hard-core Dem whackos who tolerate no free speech other than their own tendentious rantings.

Right anon 11;56, sign stealing is a staple in the Middletown Democrat arsenal.. There is one local Democrat who looks like one of the Geico cavemen who was arrested for stealing Republican signs and lying to the cops. Then there was the one year when a former Democrat candidate for township committee was caught taking Republican signs, cutting them up and then putting them back out with childishly rearranged wording. I can't believe people have continually rejected a party of such class and integrity.