I Am An American

“I am part of this country.”

Maybe too many of us Americans take for granted what that means. Not Fernando.

Fernando Cesar Dos Santos said it over and over again, tears in his eyes as he told me about his path from busing tables without papers to becoming an American citizen. Fernando did it the right way. He and his cousin came here from Brazil on September 26, 2000 on a visa, and Fernando got a job as a 28 year old busboy making $180 a week.

A month or so later, he knew that he needed a better job, so he took the bus to Atlantic Highlands and walked up and down First Avenue, stopping at all the restaurants to look for work. 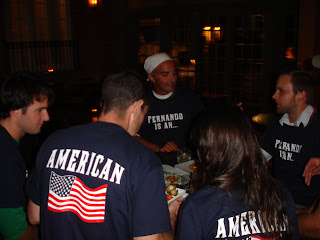 Fernando says it was “God’s hand directly” that brought him to the Copper Canyon . At the time, the location was tiny, and he didn’t think they’d be hiring, but the third time he walked by, he stopped in. When he was introduced to Michael Krikorian, he thought that the chef/owner was the kitchen help. He asked for work anyway, and Michael said he’d think about it. When Fernando got home, he had a message asking if he could start the next day.

“Michael is my angel. Everything I have is because of him and the people here. He trusted me and now I am a part of all of this.”

Shortly after Fernando started washing dishes at Copper Canyon, he asked Michael to sponsor him for his Green Card. Michael agreed and has since also sponsored Fernando’s cousin.

“Every day I checked online for four years to see if I got it. When I did, I was so excited.”

From there, it was nearly five years to citizenship.

Some Brazilians he knows think he shouldn’t have changed citizenship, but Fernando disagrees.

“My heart is Brazilian. My only family here is my cousin. But I am an American. I think everyone wants to be American.” 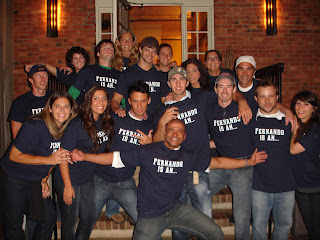 Last Monday night, the Copper Canyon staff had a party for Fernando at Taste in Red Bank. Lindsay Dewis, Fernando’s manager says it brings tears to her eyes when she hears about it.

Over the past ten years, Fernando has worked his way up from dishwasher through kitchen prep to serving, expediting, and managing. His co-workers say he studied day and night for his citizenship test and quizzing him taught them things about America that they didn’t know. That’s why they couldn’t wait to surprise him by wearing matching t-shirts. The front said “Fernando is an…” and the back blazed “AMERICAN”.

“Seeing my name on the shirt, that made me feel so special,” Fernando told me. “I never felt so special.”

“How many people want to be like me? I’m so lucky. I’m not born here, but I’m an American just like you.”

I’m going to do my best to keep Fernando’s word in mind every morning.

“I feel free. No one can say I’m not a part of this. I wake up in the morning and I’m so happy because man, I’m an American.”
Posted by Art Gallagher at 12:30 PM

Congratulations Fernando, and welcome to our family!!!

The American Dream is still alive!!

Wonderful story,
Except you are wrong when you say he did it the right way. You say he came here on a visa but if he needed a green card it could not have been a work visa and he probably overstayed his visa. Not reallydifferent from sneaking across the Border.
But I dont blame Fernando. In fact I am Happy for him.
No I blame an immigration law that is broken and has not been fixed because of politicians on both sides of the aisles who are demagoging the issue.
Fernando is a great example ogf why we need an immigration system that allows willing workers like Fernando to come here and work legally for the businesses that need them. Fernando and millions like him are an assett to this country,

Finally, a story from Grace that really MEANS something. First one I can remember that can resonate with ALL your readers and not just the wingnuts. Thank you for sharing this truly inspiring story. And God bless Fernando to keep his dream of becoming a citizen and following through to the end. Now, we just need the other 12 million to do the same and with the same kind of compassion that the Copper Canyon showed to Fernando, maybe they will.

There is no difference between someone who overstays a vistor's, student, or tourist visa, and the people who cross the border. They are stepping in front of people who wait for immigrant or wark visas. I guess the some people are not aware that over stay visas is as big or bigger problem with illegal immigration than the border.