A Wave That Started On The Jersey Shore 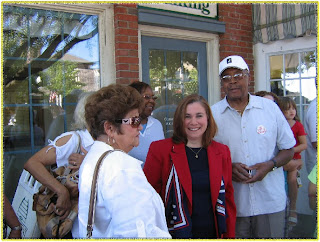 Over 100 volunteers in Anna's Army descended upon Ocean Grove on short notice yesterday for a rally, door to door literature drop and show of force for Anna Little's interview with CNN.

I don't remember the national media ever paying attention to a New Jersey congressional race. Something is happening.

CNN's Soledad O'Brien interviewed Little and Congressman Frank Pallone yesterday. Little told MoreMonmouthMusings that she was very happy with how the interview went. Little understands that the segment will be the first part of a series on the mid-term election campaign. It is expected to air during the second week of September. No matter how CNN spins it, advantage Little. Something is happening.

Something has been happening for months. Its gaining traction. Those who subscribe to the conventional wisdom are starting to notice. They can see the wave coming. 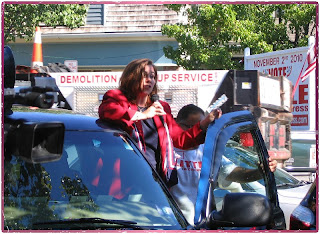 Those who were resigned to Frank Pallone staying in congress are waking up. They are starting to invest in Anna Little's campaign. Little, who had only $16K on hand in June has raised over $200K and has over $100K on hand. That's still paltry compared to Pallone's $4 million +, but the cash is coming with the wave and Little won't need a million to beat Pallone. 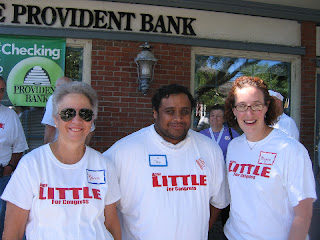 As my friends as InTheLobbly said yesterday, "make no mistake -- if Pallone is defeated, that Republican wave began right off the Jersey Shore."

It's not a Republican wave. It's an American wave that rejects the Obama/Pelosi/Pallone/Holt extremism.
Posted by Art Gallagher at 6:41 AM

The Commie News Network (CNN) taking interest in the race means one of two things.

One, that the Dems nationwide are really scared and trying to find a way to cut our legs out from under us, or

Two, they're actually surprised by the fact that "We The People" are actually waking up and paying attention to what's going on, informing ourselves on the candidates and their platforms, and using that info to influence the government how they see fit.

This is getting very exciting. Very exciting indeed. This is going to be amazing for NJ when Anna wins in November.

if everybody who believed before, and are believing now, stays TOGETHER, and rows in the same direction, and does/says something POSITIVE every day, for the next 60days, then also drags out 5 good votes for her, we all will celebrate together, as one of the most amazing upsets in NJ election history!..so, to all: FOCUS, SUCK IT UP, and keep on going, Anna's Army!!..

Anna Little got 100 volunteers out yesterday for a reason. These volunteers want the media to know who their choice for congress is and it ain't Pallone! We want change! We need Anna Little as our representative in Washington. She respects the constitution and she will uphold it! She will help restore America to her rightful place in the world! Ours is the greatest nation on earth and Anna Little will take this message with her to Congress!

my left nut has a better chance of falling off tomorrow than Anna Little breaking 40% You guys are nuts - you are never going to convince DEMS to vote against Pallone - That is the ONLY WAY he loses and LOTS of dems have to vote against him! If any of you took a Poli Sci class, you would know what gerrymandering means.

Pallone hasn't spent a penny on this race and hes still way ahead. He'll spend a million dollars in September and another in October and he'll raise it back during the same time slamming Little among Independents as too far to the right and targeting Democrats. He'll target Latinos on Immigration and he'll target shore voters on drilling - whether he is responsible for it or not, he HAS THE MONEY TO PUSH HIS MESSAGE. He'll win with 60% of the vote and by December will have over 4 million in his coffers again getting ready for that senate seat. They will label Little as too extreme.

Do you realize he hosted a fundraiser for a Jersey City Councilman last week? Thats how serious he is taking Anna Little. He has taken enough internal polls. The guy didn't win a Republican State Senate Seat, go to Congress at age 38, get re-elected 11 or 12 times with over 65% of the vote and becoming one of the most powerful congressman in the country by being an idiot.

There is a reason Pallone is going around calling himself a PROUD LIBERAL and a PROUD PROGRESSIVES. He KNOWS who needs to vote for him. NOT CONSERVATIVES!!!


THE REAL RACE IS IN Districts 3 and 12 - that is where we can win. We have an outside shot of beating Holt, tough but doable thanks to Scott's deep pockets and we should be able to win 3 with Runyan running strong.

The Art Gallagher show can go on all day long but Anna Little does not have a prayer. I like her very much and would love to see her win but I'm a realist. THe Little express will tank it at a loss 61-39 - I call it here.

You have absolutely not the foggiest clue of what you're talking about. Little's poll, weighted intentionally more heavily Democratic than the actual district numbers, was taken the first week in August before she had personally talked to 25,000 voters and counting. I can almost guarantee you that the actual numbers right now are within the margin of error.

I got into it with some knucklehead like you over at Illions' place who bet me it would be 70-30 Diane and we saw how that turned out. I didn't get my bottle from him either.

I'm trusting you're a more honorable man, if naive and sorely lacking in common sense, than J. Joseph Rivera.

Friendly word of advice, don't leave the house without an umbrella from now on.

at least ive taken a math class - if little wins 54-48, we all have much bigger problems.

"at least ive taken a math class - if little wins 54-48, we all have much bigger problems."

I built in the 2% of deceased 6th District voters that Frank will have to attract to have any shot at winning this thing.

Don't worry though, I'm sure the campaign will have enough challengers for that too.

The fools who still think that Pallone will win are still in last cycles election.

Pallones sorry carrer is about to end.

Accept it: her long-shot's working said...

hey, being so under-funded, normally, 40% against Frankie has been the best showing, since the '90 race,when Judge Paul Kapalko lost to him by I believe,less than 1700 votes!..I'm hoping/predicting realistically, that Anna wins by the same margin Nobama did,in '08: I think it was 52-48, around there..and, when you add awakened and fired up I's, that includes a lot of the TEA folks, plus R's, many who've come on board after Gooch, to support the team, and add regular, conservatives and R's, throw in a few pro-life, more moderate D's, then minus a lot of the Nobama kids,who only "rock the vote" every 4, and minus those D's who are just so embarassed their boy is putting them out of their homes and will just stay home that day, ACL can't lose this race, this year!-Go-Go-Go!..and,super, let Palloney keep out of the district he's taken advantage of for so long: FINE with us, it's the last time he will!..